I first heard the The Rose (by Bette Midler) performed by a women’s a cappella quartet at Colgate University, in an on-campus coffee house during the dead of winter. How could I have imagined that literally ten years later, I would be in glittering drag, lip-synching the song at one of my best friend’s memorial services at an historic theatre in Atlanta?

Colgate was a very straight place. Homophobic. Heterosexist. You had to dig through dark crevices to find any traces of queer. It was a bit of a disappointment for this desi boy who had arrived from Ghana, to find that the warm homsexual welcome that I had expected was the last thing one could expect from this chilly liberal arts college. And although, for the most part of my first year, I was in the metaphorical “closet,” my musical tastes apparently betrayed my sexual preference. Spice Girls, Shania Twain, Britney. To me they were good songs. To the rest of my residence hall they were gay songs. I hadn’t a clue! To some I was simply foreign, but to most, I was clearly gay. I was out well before I was out.

But in that way we have of narrativizing our (queer) pasts, I guess I’ve always leaned (strongly) toward those things commonly read as gay: Cher, Ricky Martin, The Vengaboys, Matthew Bourne’s Swan Lake, cheerleading. But growing up in Ghana, then attending a small liberal arts college in the Northeast, I had not learned about Camp: that sensibility that holds at an ironic distance the sentimental and nostalgic signifiers of queer desires (what does that even mean?).

And so when I heard The Rose for the first time, performed by these four straight-ish women, my love for the song was completely sincere. The schmaltz of the song was pure honesty, if not a somewhat spiritual truth. I hadn’t been trained in the cynical ways of the jaded queen to both love and hate that song. Or even to love it because it is by her majesty Bette Midler. Again, I only learned of her majesty from gay men in San Francisco and New York later on in life. It wasn’t until senior year, when I heard a parody of it by a drag a cappella quartet, The Kinsey Sicks, in which Midler is literally exalted—“and you’re not fit to kiss her toes”—that I registered its camp value. From then on, the song became a guilty (gay) pleasure. Its earnest message was a palimpsest for bitter views on love that I developed due to unrequited attention from straight men and muscle queens who didn’t give short brown men like me the light of day.

Camp is a difficult aesthetic to explain, and even more difficult to live with. It makes sincerity almost impossible. But I do love the song. So when I sung it (badly, to myself) it was only in the privacy of my own home, at the lowest whisper. Until my roommate Allie caught me one day! Flushed, I admitted that I like the song, and she realized that I could not help singing it if she started it. In public places, she would hum it, and after rolling my eyes I would join in, reluctantly but involuntarily.

When my Allie died unexpectedly earlier this year, her parents decided to honor her with a big theatrical spectacle. All her friends and family came together to stage a show, in her memory. This seems like an odd way to celebrate a life, but there was nothing more appropriate to remember my friend and her commitment to performance. My contribution was of course: The Rose. I performed it to the most extreme extent of my drag abilities: blonde wig, gold tights, leopard print top, f*ck-me boots, a glitter-covered coat, glitter makeup, body glitter, and even loose-glitter that I blew into the audience at the line: “far beneath the gentle snow.” I’m sure Allie, wherever she watched from, was cringing at the thought of The Rose being performed at her memorial. It was camp at its best: excessive, melodramatic, mocking, sexy, irreverent, and strangely, absurdly, truly sincere.

Because no matter what I did to violate the song’s integrity with my dragulous performance, Midler’s words meant too much to the circumstance. She rang true for everyone, including myself. And so even as I have come to live in Camp-land, with my fellow bitchy queens, there are spaces I will enter where Camp will fail, and must fail. And we must believe in sincerity, even when trained not to trust it. Two weeks after the celebration, Allie’s mother emailed me:

Dearest Kareem,
I want to share with you that your performance of The Rose has become for me one of the most healing parts of this entire experience. I knew the song before, of course, who doesn’t? And I enjoyed watching you do it live with such great affect.  I loved hearing you tell about breaking into song with Allie in such random places.
But now, on mornings when I wake up crying and just want to curl up into a fetal position to make it all go away, instead I play the Divine Miss M and really listen to those lyrics and imagine them being performed by the Creative Mr. K.
It reminds me to let my soul be afraid of dying and my heart be broken as often as it takes, so that in time this loss becomes understandable and possibly even bearable.
The theatre is sacred space. I would never have gotten such solace from a funeral service.
With much love. 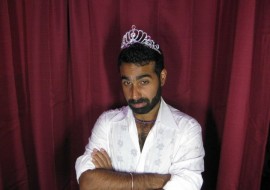 About the guest author