Why is it okay to show Hijra as scheming but not violent? Firstly, the movie did not spend enough time on the character development of the Hijras. As I saw it, they were shown as supportive of Vijay and loyal and fierce. They rise up in arms against a mob of cruel men that have thronged to witness and participate in the auction of a girl. What’s wrong with that?

Srini wrote a quick post on his thoughts about Agneepath following the screening, as part of the Pride Week activities. Although he and I sparred slightly on Twitter over this, I am glad he’s provided a chance for me to write my response without the 140 characters limitation.

I don’t think it’s fair to compare the 1990 movie with the 2012 re-make/revamp/vamped version.

Agreed! But that’s exactly the review seems to be doing. You cannot compare the two Vijays or the two Suhasinis. A note from Karan Johar before the credits run in the beginning, hints at the imminent departure from the original. I don’t remember his foreword exactly, but I paraphrase: “the Agneepath of ’90 formed a pillar for the production of Agneepath of 2012”. The storyline was developed differently (for e.g: the events that led to Masterji’s death) and the supporting characters were new. Why even, ‘Kancha’ is merely a name shared by Danny and Sanjay Dutt. In character, they were both quite different.

– the Censor Board’s license – U/A – really? how are children supposed to watch a post-rape scene, couple of bloody murders and extreme violence in the name of a ‘storyline’ and still stay awake at night? Or refrain from trying some of the stuff out?

I don’t know how many people actually follow the Censor Board’s certification, to begin with. The movie also opens with the obligatory disclaimer that the movie is too violent and may be unsuitable for young viewers. People who did go into watch Agneepath: what were they expecting? A Disney remake of the original? The original was rife with violence and parents should know better than to bring kids along. And a separate rant: Parents should stop taking kids to watch movies altogether unless they are old enough to stay still and shut the hell up. Exception: Disney/Pixar movies.

– Rauf Lala (Rishi Kapoor) is a brilliant character, but somehow lacking a decent end. Could’ve been a lot more emphatic towards the ‘death’

I find it hard to sympathise with a man who made a career out of selling underage girls. Vijay tries his best to walk away out of some misplaced sense of respect. But Rauf deliberately provokes Vijay into killing him; either because he no longer has the will to live (having lost his oldest son) or he’s self-destructive and eggs Vijay into doing something his conscience (or whatever is left of it) doesn’t permit him to, at the cost of his own (Rauf’s) life.

In fact, the mother who hates him for his violence, later on almost cheers him in the 2012 movie towards killing Kancha

If just for a moment, you look at Suhasini’s character as someone new and different from the original, you will see that this is a more realistic portrayal of a widow who wants her children to live and follow the ideals of her upstanding husband but crumbles in the face of reality when she understands how the trauma affected her son. She stops being the widow and instead becomes the mother who just wants her son alive. Suhasini, as played by Rohini was an immensely unlikeable character, but Zarina Wahab portrays this character as someone you can feel bad for.

– The villagers of Mandwa are shown as ultra-dumb, money-minded people. Really? Will anyone in this age even be able to relate to that? Satanic colonies that trade cocaine? Mafia that is only full of venom, blood and the Kolaveri (urge to kill)?

Good grief! Could we have some show of hands from people who went into watch Agneepath hoping to relate to Suhasini/Shiksha/Vijay? The movie is fictional, the characters are fictional. But since we’re talking about portrayals and political correctness, let’s look at the villagers of Mandwa. They first side with Kancha when he presents an oversimplified grand scheme to make quick money. Who doesn’t do that? Since times immemorial right up till recent past, villagers have been selling their land for prices way below their market price in hopes to make some quick money. Soon, the money runs out and demonstrating some “sellers’ remorse”, they decide to protest against the government and ask for more money. The foolishness of this aside, the greed (as shown in Agneepath) is completely realistic. Read up on the Tata Nano factory debacle in West bengal and the land fiasco surrounding Buddh International Circuit at Jaypee Greens Sports City. The Mandwa folks (somewhat reluctantly, perhaps) support the Master as he talks them out of selling land to Kancha and then again support Kancha when faced with the Master’s alleged treachery. Though not shown strongly enough, the villagers show a glimmer of doubt and fear when Kancha hangs the Master. This is depicted through their shell-shocked silence as the Master’s writhing stops as life slips out of his body. Mandwa’s transformation from a cheery colorful village (opening Holi scene) to a grey dreary Lanka has been shot wonderfully in Agneepath.

As for mafia deaths? I have three words for you. Mexican drug cartels.

– Hijras shown as clever, scheming people is okay. But as violent mobs? Dagger and knife-armed killers? Come on! Get a life! I know we’ve not portrayed Hijras in Bollywood for quite some time, but then comes this ghastly, scary image of the queens. Don’t compare them with the buggers in Ninja Asssassin.

This is the part of review I most disagree with. Why is it okay to show Hijra as scheming but not violent? I acknowledge, the movie did not spend enough time on the character development of the Hijras. As I saw it, they were shown as supportive of Vijay and loyal and fierce. They rise up in arms against a mob of cruel men that have thronged to witness and participate in the auction of a girl. What’s wrong with that? Would you rather that Hijras be shown as only sweet loving angels who provide comedic relief from time to time (as is the case in Bollywood now)? I could write a whole new post about movies where Hijras paid central and negative characters that are worth complaining about. But I’ll leave you with one enduring image that haunted me for ages after having watched the movie. 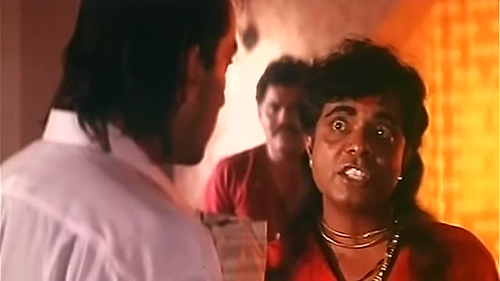 I have said this before and I say this again. If we queerfolk are truly fighting for equality, then we should be comfortable with being shown in positive and negative light in the media as long as they aren’t ill sketched caricatures. If the violent army of Vijay were comprised of women and not Hijras, would we be as vociferous in our protest about the way they were portrayed? It also seems weird to me that, we must protest against violence being shown in an action movie.

All in all the movie wasn’t half as bad as Srini’s review implies. Yes, it did have its flaws. The character of Vijay as a child appears to be a lot more vocal and stronger than Vijay as an adult. I understand that they wanted to build a silent brooding anti-hero. But there should have been a few more dialogues to depict the dichotomy of Vijay as a gentle, charitable, do gooder and the tortured, anguished, grieving renegade trying to avenge his father’s death. Also Priyanka Chopra as Kaali is a constant annoyance and distraction in the movie. I was part relieved, when her character was killed. It seemed very unconvincing to see such a strong emotional reaction from Vijay when she dies, given how he’d been aloof to her for most part of the movie.

But the movie’s strength was most certainly the acting of Rishi Kapoor, Hritik Roshan (he worked with what he got) and Sanjay Dutt. Not to mention the ever under rated hero: the background music. It’s a shame that Indian movies do not devote enough importance to original background score. This is the one place where the Agneepath of 1990 and 2012 are comparable. Mukul Anand’s Agneepath had background music which was ‘inspired’ by Jean Michel André Jarre and the 2012 Agneepath had original music by Atul-Anand.

I am glad that yet another movie (last one was Wake Up Sid) has come out of the Dharma Productions stable which does not rely on stereotypes, familiar tropes and offensive humor to make the film work.

The Cathartist is the Editor at GaysiFamily. She remembers nearly all her dreams to the last detail, would rather skip a movie than watch it after missing the first five minutes, has a rare form of Tourettes leading to inappropriate conversations and is a hopeless jerk magnet. If she ever writes a book, it will be called "La tyrannie d'anciens amoureux".