Is Fair The Only Lovely?

April 6th, 2010
Written By The Cathartist

What is the one thing you dream of achieving? Is it a successful career? Is it a career in hair styling? Is it a career in the movies? Is it a career as cabin crew? Maybe you’d like to be a sports commentator? Or are you more oriented to the life of a house-wife? (I will never ever say home-maker, even if you hold a knife to my jugular vein) Is there a boy whose attention you wish to catch? Whatever your life’s ambition, it is achievable in six weeks or less. No hard work necessary. No annoying brokers either. All you need is a tube of fairness cream. The obsession for fair skin is the only politically incorrect thing that Indians will not take to the streets for. Everything else must be attuned to the Indian culture, may it be nudity, sexual orientation, pre-marital sex, Valentine’s Day, etc. But this preposterous theory that the Indian cosmetic industry propagates, that fair skin is the only thing that stands between you and success goes unchallenged. But what drives this giant machinery that churns out such ridiculous ads by different names? You. You.. Even You.. Especially You. That’s right, by continuing to use Skin Whiteners, Perfect Whiteness, Fair & Lovely and such ridiculous products, you’re a part of the system that says that it is acceptable to attribute light colored skin to all things good and dark colored skin to shame, ugliness and humiliation. It is little wonder that the countless matrimonial advertisements seeks “wheatish skin/fair skin” among many other laughable qualities (god-fearing, homely etc). In Bollywood, we have ambassadors for everything.. polio awareness, AIDS, child education, animal welfare etc. However these same actors silently promote a seemingly innocuous form of racism. While these fairness ads are a dime a dozen, two have been the most disappointing.

Case 2: Now I admit, this one’s not for a fairness cream. But cmon, look at her.. she practically looks Caucasian. 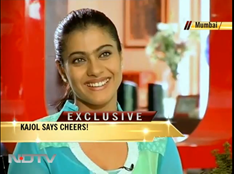 Now some enterprising TV soaps have taken advantage of this stigma against dark skin, producing serials like Saat Phere, Bidaai. I am willing to ignore the fact that the complexion of the protagonist of Saat Phere lightened by several shades by the 100th episode and Bidaai stopped being about skin colour after the first 50 episodes or so. While some TV series take to Uglify-ing women by adding several 100 pounds or adding braces and big pair of frames.. a new TV series by the name of Laagi Tujhse Lagan has decided to do it by blackening her up. Quite often south Indians are butt of jokes among North Indians. They’re called Madrasis, Idli Sambar and .. wait for it.. Kallus (darky’s). This stereotyping of Dark being Ugly will continue to persist until women like you decide to go up in arms about it the same way they do about eve teasing, child marriage, dowry and the works. And maybe you should spare a thought before you reach out to buy the next tube of skin cream. What’s wrong with a darker shade of wheatish?

What about me you ask? I am doing my bit to further the cause by reserving a special brand of ridicule and disdain for those who use fairness creams.

Read more by
The Cathartist