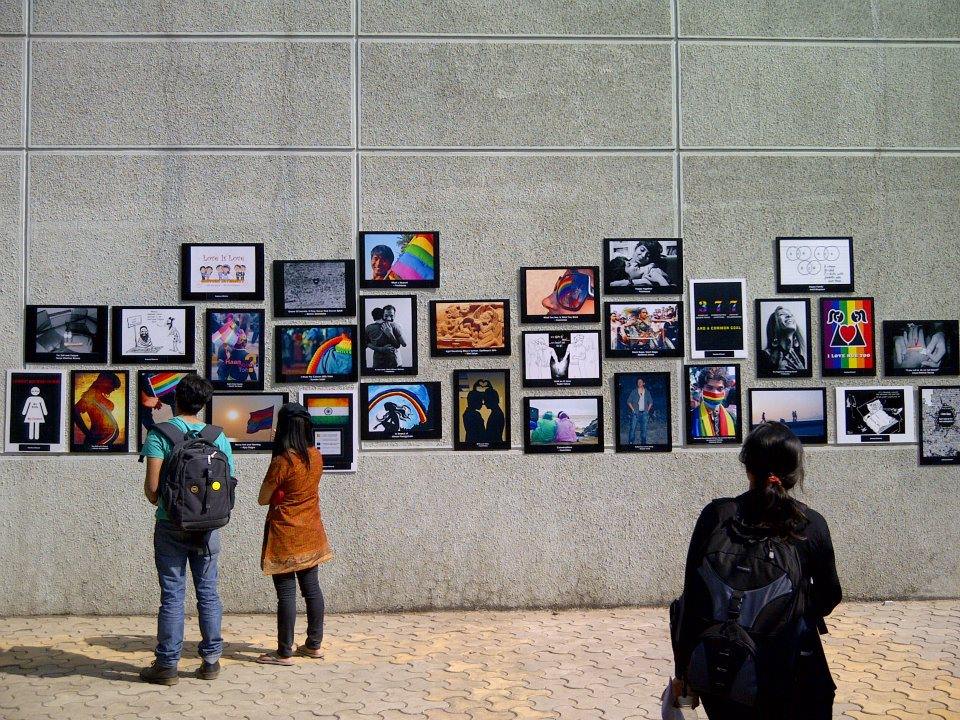 This annual exhibition features creative pieces from within the community, in styles ranging from traditional artwork to caricatures, cartoons and photographs.

THEME: In It Together

“When people’s love is divided by the law, it is the law that needs to change.”

June 26th, 2015, saw Americans witnessing one of the many watershed moments in LGBT history. While the landmark judgement made by the US Supreme Court was in itself a victory, what followed was a reaction that will be etched in the memories of many LGBTIQ folks worldwide.

All over social media, allies from all walks of life openly showed their support with a brush of the Pride rainbow over profile pictures. And it didn’t just stop there: when homophobic attacks started pouring in, the same allies stood up for their LGBT peers, friends and families.

This outpour of solidarity may seem like deja vu to many of us back in India, bringing back memories of a similar Supreme Court with a drastically different judgement. On Dec 15th, just a few days after Section 377 was decriminalized, LGBT individuals and supporters came together in protest, representatives from several parties made LGBTIQ rights a priority in their manifesto, and a number of celebrities – including Celina Jaitley and Aamir Khan, who later raised awareness on this issue in his show Satyamev Jayate – pledged their support. Months later, when the Supreme Court recognized transgender people as a third gender, the same allies regarded this as a triumph. The years following these two judgements saw a tremendous rise in the presence of allies proudly brandishing the Pride rainbow at LGBT rallies and Pride marches. In turn, LGBTIQ individuals have asserted, time and again, that their rights cannot be fought for in a vaccuum, and have raised awareness on numerous causes – be it the environment, animal rights, child rights or feminism.

The Pride rainbow symbolizes a number of things for such a diverse community. It celebrates individuality, the power of love and the beauty of embracing our uniqueness. On the other hand, it also tells us that the triumph of unity lies not in conforming to one way of being, but to loving and embracing each other *because* we are all different. In recognizing that we can still understand and value each other’s’ struggles. That we can fight for each other’s’ rights even when we can’t fully know what they are going through. That contrasting colours matched together look beautiful. That we are in this struggle…together.

Our theme this year focuses on issues of solidarity and intersectionality. It focuses on an aspect that holds importance in any civil rights movement – support – within the context of the LGBT journey. This support could come from anywhere – from families, from friends, from the workplace, or the public sphere. From within the community to a marginalized group outside it. We would like to explore, through art and photography, how solidarity strengthens individuals and communities, and helps them move forward in their fight for their freedoms.